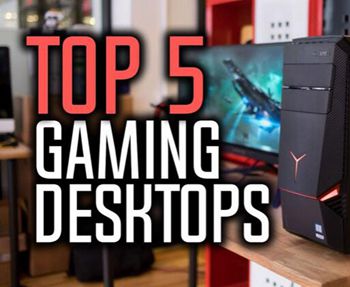 Although many people like gaming laptops, if you are a game enthusiast, you must buy a gaming desktop!

Whether it’s sound, color, or gaming experience, it’s even better. And its price is more affordable.

With the advent of exciting new games such as Doom Eternal and Outer Worlds, it’s important to get the best gaming desktops with the latest and greatest components.

If you want to assemble a gaming desktop, you have more options, whether it’s Intel, AMD or Nvidia.

The only question is how to assemble a gaming desktop that suits you?

So we made this guide, and you can give you more choices whether you want to spend or save.

How we test the best gaming Desktops

In our search to find the best gaming PC, we run every model we review through a standardized gauntlet of real-world and benchmark tests, in order to measure how each desktop stacks up as both a gaming machine and as an everyday computer.

As far as hard numbers go, we currently run the framerate benchmark utilities for Shadow of the Tomb Raider, Far Cry: New Dawn, Red Dead Redemption 2 and Middle-earth: Shadow of War at 1920 x 1080 with graphics maxed out, as well as at 2560 x 1440 and 4K if a system allows for it. On top of that, we play tons of graphics-intensive games in order to give you a sense of how these gaming desktops hold up anecdotally.

In terms of synthetic tests, we run a gamut of benchmarks that include 3DMark Fire Strike Ultra (for graphics) and Geekbench 4 and 5 (for processor performance). We also run the SteamVR Performance Test on all of our machines to evaluate how ready they are for virtual reality. To test a system’s hard drive, we measure how fast each PC can copy 4.97GB worth of multimedia files. 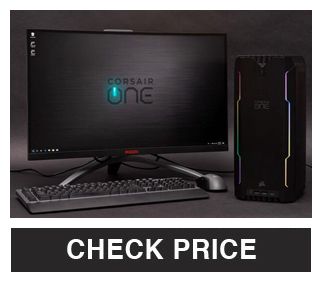 Our highest pre-installed gaming desktop is the new Corsair One i160.

It’s still a small computer, but with the latest hardware, improved internal layout, and other minor changes.

As before, its CPU and GPU still use a separate liquid cooling solution, and all hot air is still exhausted through a single 140 mm magnetic suspension fan.

But now its PSU is located under the motherboard, and some USB ports have been relocated on the front of the chassis.

In addition, it has two other configurations, the i140 model and the i180 model, which are available in different configurations and at different prices. You can buy it according to your needs.

All in all, the latest Corsair One is a stylish, powerful gaming desktop. 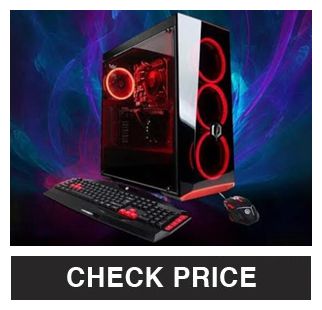 If you want to buy a powerful gaming desktop with a limited budget, don’t miss the CyberpowerPC Gamer Xtreme, which sells for less than $1000.

It is equipped with Intel Core i5-9400F and Nvidia GTX 1660, it is an excellent PC, although its configuration is not comparable to other competing products, but considering its low price, it is still worth the money.

In addition, it is an excellent office tool that can handle a large number of files and run a variety of complex graphics software.

You spend less money, but you can buy a business office, entertainment and leisure PC, why not?

In the field of electronic technology, HP has a long history and professional knowledge. Omen Desktop has given us a lot of surprises in the field of games.

This also reflects the pragmatic nature of HP’s unpretentious nature!

You won’t find a well-designed liquid cooling system or a huge RGB lighting kit, but its quality and performance are definitely worthy of recognition.

In addition, the HP Omen desktop computer is designed to be tool-free and upgradeable. There is no doubt that this is one of our best gaming desktops.

This is a PC based on the Z370 platform, one of the most powerful and versatile systems in its class.

It supports the eighth generation (Coffee Lake) Intel desktop processor, GTX 1060 or GTX 1080 graphics card option, which is the largest storage PC with the highest capacity ratio we have ever seen.

In addition, its black steel and aluminum structure base and clean and tidy appearance have become a miracle.

If you need a small computer with a very small size and like to build your own PC, the new Z370 Deskmini is definitely worth the money.

Like most pre-built PCs from Dell (and its subsidiary Alienware), XPS Tower Special Edition can be configured in a variety of ways depending on your needs and budget.

However, even the lowest configuration is a VR-enabled PC with enough features to guide you through the dawn of the next generation of games.

Its minimum configuration is the Core i5-9400 and GTX 1050 Ti, which, despite its amazing power consumption, is capable of handling most modern games at 1080p mid-high settings.

We tested the Special Edition, which is built on the 9th generation processor and is not only great for games, but also increases productivity.

If you want a simple-looking gaming desktop, then the XPS Special Edition is definitely our first choice.

Before buying a gaming desktop, we have a number of factors to consider, such as price, performance, and appearance.

What is the most important factor? I think this varies from person to person.

If you are not short of money, then you can satisfy your needs by purchasing a high-profile gaming desktop.

But the facts are always distressing. We need to consider many factors. What is the most important thing? please look below!

We all know that the CPU is the heart of a computer, and the graphics card directly determines the quality of your game. So they are definitely the most important configuration.

In the high-end market, many of today’s top gaming PCs are equipped with an overclocked Intel Core i9-9900K processor and Nvidia’s RTX 2080 Ti graphics card.

If you want to improve performance, you need to explore models with multi-GPU support, such as Digital Storm Aventum X or Origin PC Millennium.

But not all players have enough money, so most gamers may want to use only one high-end graphics card, such as Nvidia’s RTX 2080 Ti series or AMD’s new 7nm Radeon RX 5000 graphics card.

Even if you are not an avid gamer, there are many affordable gaming PC options for beginners.

Pre-configured options from well-known brands such as Hewlett-Packard, Dell and Lenovo are a good starting point, and if you want a more dazzling product, you can buy exclusive game brands like ASUS, Alienware and MSI.