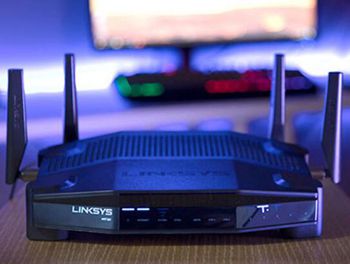 The best gaming routers have the twin benefits of both offering the fastest and most reliable connections, on the latest standards, but also come with looks so edgy you could cut yourself. With Wi-Fi 6 support growing, and promising greater bandwidth to a greater number of devices, now is the perfect time to upgrade your old router with something a little smarter.

If you’re a PC gaming enthusiast, you know about speed. Gaming rigs are good only if they’re tricked out with the latest and fastest CPUs, lots of memory, the quickest solid state drive (SSD), and, of course, the best graphic cards.

A gaming router could turn things around. The best ones allow you to play at your full potential. You could become a champion, owning whatever world you set foot on.

But before you buy the most expensive model, read through this guide to learn exactly what you should be looking for in a gaming router. 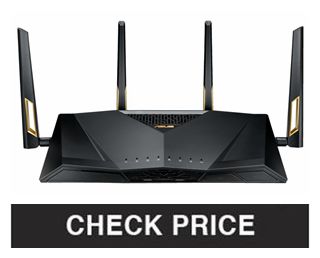 The Asus RT-AX88U is the best choice for a high-end router. It features next generation Wi-Fi 6 (802.11ax) technology, and an impressive eight Gigabit Ethernet ports, which even support link aggregation. Backing this up is the usual excellent AsusWRT interface, which allows granular control of every imaginable setting. There is also class leading Adaptive QoS, along with Trend Micro antivirus and the WTFast GPN—all with subscriptions included for the lifetime of the router—which are standouts among competing routers.

While the 2.4 GHz speeds are adequate, the 5 GHz speeds are where the RT-AX88U shines. Furthermore, for gaming in a congested environment, this router outdistances the competition. Sure, next generation ‘super router’ performance comes at a price of $346, but given these benchmarks, at least it’s justifiable. 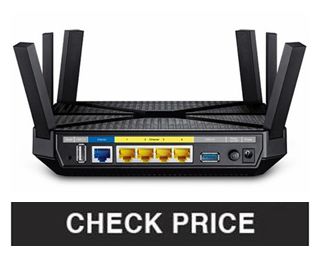 The TP-Link Archer C5400 v2 is an upgraded version of the C5400, coming with a new (lower) price, and a number of smart home features that will appeal to people who have a house full of Amazon Echos, Hue lightbulbs and other connected gadgets.

Even if you’re not the sort of person who likes barking orders at Alexa, the TP-Link Archer C5400 v2 comes with a build quality and level of performance that we’ve come to expect from TP-Link.

So, on paper at least, the TP-Link Archer C5400 v2 is a router that should appeal to enthusiasts, gamers, small businesses and even casual users alike. That’s a pretty diverse audience, so can this router please everyone, or is it a jack-of-all-trades? Read on to find out.

If you’re searching for the latest router technology but you still like that old school look, the TP-Link Archer C5400 v2 might just be an ideal fit. This is one of the best gaming routers that pairs enthusiast grade features with a simple setup, packing them into a package that’s appealing to just about anyone. Factor in the Alexa support, and you have a router that can adjust to any situation, whether you’re trying to come out on top in the latest match in Apex Legends, or you have guests that are connecting to your network.

As the second device from NETGEAR on our list, the NETGEAR Nighthawk AX8 8-Stream WiFi 6 Router (RAX80) is a more expensive and upgraded router from the brand. This NETGEAR device provides WiFi connectivity for the entire house with its four high powered antennas, it can also be connected to 30+ devices, making it an even more versatile device. Its USD ports also allow for more connections with other household items such as the printer or storage drive.

This device has worked great for gamers as although it is not specifically built for that purpose, it still houses such strong internet connections to provide the ultimate experience. It also prevents network congestion no matter how many devices are connected, providing for smoother use with no interruptions.

An added bonus to this device are its parental control options and the Nighthawk app which equips users with more options gives parents rest of mind and aids an easy set up when first purchased. NETGEAR specializes in creating devices that optimize your online experience and as most customers can confirm, the Nighthawk AX8 8-Stream WiFi 6 Router (RAX80) meets all the required expectations.

Regularly selling for less than $120, the D-Link DIR-867 was the most inexpensive gaming router that I tested for this roundup — and it performed surprisingly well, boasting the fastest average speeds on the 2.4GHz band in both our lab-based top speed tests and our home-based real-world speed tests. It held its own on the speedier 5GHz band, too, beating out several wireless routers that cost significantly more.

Die-hards will likely want more features focused on their gaming experience and performance, but the DIR-867 gaming router at least includes a quality of service engine to let you prioritize gaming traffic above other types of network traffic. That’s enough for most — especially if you don’t want to break the bank on something fancier.

Just note that it’s getting difficult to find this model in stores, as stock seems to be running low. We’ll update this space once we find another affordable option that we like as much.

The Linksys router seeks out your console and makes it its number one priority with beamforming technology that means you can always rely on your connection during the most intense gaming sessions. Also included is a custom-built gaming interface that provides ultimate control for gamers never experienced in a router before.

Linksys WRT Router is primarily designed to solve Xbox gaming problems, so you might not need it if you own a PS4 or are a PC gamer, but for those with an Xbox, the optimized gaming network means that the rest of the family might miss out, but when you are battling to reach the top of the worldwide leaderboard, their concerns can wait until you emerge victoriously. Good flight sticks might help you in your game so check them out as well.

It’s not much fun to play when your game keeps freezing up or you constantly find yourself a step behind everyone else. You acted first, but it doesn’t matter because by the time the signal gets to the game server, your character has already lost his last life and all of your possessions have been taken. You’re going to have to start over from scratch. Again. This frustration has nothing to do with your skills. Your router just can’t keep up with the heavy demands of online gaming.

Q. Why would I particularly want a ‘gaming’ router?

The reason you go with a gaming router over a normal router is that they can prioritize traffic to your gaming PC and consoles—they’re built to be greedy. The best gaming router reduces lag during your online game sessions even if other devices in your household are streaming or downloading. If you’ve had the same router for years, it might be the right time to consider an upgrade if you want to get the most of your internet.

A. Given the potential for Wi-Fi connections to have hiccups we would always suggest, where possible, to have your gaming PC wired into your router directly. Failing that, by a Powerline connection. Wireless connections are getting more effective, and Wi-Fi 6 is good enough that wireless VR streaming is actually now possible. And if latency creeps in there that’s when you throw up.

Q. Can I use any gaming router with my provider?

Before you splash out on a new router you will need to make sure that it is compatible with your current ISP. Some ISP-provided cable modems, for example, don’t offer pass-through connectivity to allow a high-performance router to be paired with it. So it’s important to make sure you’re not wasting your money.