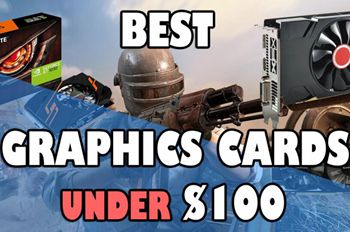 Nothing’s going to stop gamers from building a gaming machine, even if they only have $300 to their name and no electricity! If you find yourself in a similar situation, except maybe with access to electricity, then that’s probably why you’re looking for the best graphics cards under $100.

We’ve rounded up all the graphics in this price range and did an intensive comparison to see which among these really are worth spending.

These graphics cards will not trouble your PC gaming performance. We understand the fact that not everyone can afford a mid-range or high-range graphics cards, but we make sure you get the best option available on the market in your budget. Let’s Begin!

Which Budget GPU is Right for You?

While it is true that the better the graphics card you have, the higher the framerate you can get in your games, it is also true that even today’s top games can be run fairly well by a budget graphics card at 1920 x 1080 resolution.

If you’re playing non-demanding games, like Rocket League, League of Legends, or Dota 2, etc., you can save even more money by going with something like an RX 550 or GT 1030 without sacrificing much in terms of your in-game experience.

Nvidia has always been at the forefront of computer hardware.

Whether it’s a high-end gaming graphics card or an entry-level discrete graphics card, Nvidia is an important player.

This GT 730 discrete graphics card has long been loved in the low-end gaming graphics field.

But if you need a graphics card that can run large games smoothly, then it is not for you.

The GT 730 is affordable and can run some small games smoothly.

Especially in terms of video playback, it can show a clear and smooth picture.

In general, it is one of the best graphics cards at this price.

If you want graphics card under 100, you have to mention AMD’s products.

We really like AMD, it always produces affordable products!

Based on the Polaris 12 core, the RX 550 is a new generation of desktop entry-level products.

Its performance is 1.7 times higher than the R7 250, making it an ideal platform for building a Home Theater PC (HTPC).

In addition, it supports HDMI 4K60, 4K video playback, HEVC content, HDR, FreeSync 2 and so on.

Not only that, but its performance in the game field is also quite powerful.

Although playing a large single machine is a little hard, but driving online games such as LOL, CS GO is not a problem.

The Gigabyte GeForce GT 1030 and the Nvidia GeForce GT 730 are the old rivals in the low-end graphics card space.

They all have a high price/performance ratio.

First, the card comes with a full-size slot bracket that includes a half-height bracket and an elongated casing.

In addition, the GeForce GT 1030 uses a GP108 graphics processor consisting of 1.8 billion transistors to play a variety of HD video.

Surprisingly, its power is relatively low, so don’t worry about heat dissipation.

You can run most games at the same time, and the price is reasonable.

Although the MSI GeForce GT 730 is not sold well by Nvidia and AMD, it also has an important position in the GT 730.

In addition, it has VGA, DVI-D, dual link and HDMI connection interfaces.

The biggest advantage of the HD 7450 is estimated to be a cheap price!

If you use it to run large games, it will disappoint you.

But in the office field, it is the well-deserved boss.

Its compatibility is quite powerful and works flawlessly on Windows 7, 8, 8.1, 10, Vista and XP.

In addition, it also supports Blu-ray 3D and stereo 3D.

Most importantly, its noise is very small!

When we were running the computer, we could hardly hear it.

I think this is why it is very suitable for office use.

The GeForce GT 710 2GB from MSI Gaming is a solid, mid-range graphics cards with a price well under the $100 mark. It’s a great daily driver, that supports just over 1440p display – quite a feat for such a cheap card, and one you would have paid around four times as much for a few years back.

It’s got a great compact design, making it perfect for small stealth builds, or a homemade Steam Machine. It’s got Afterburner Overclocking Capabilities, and with 2GB DDR3 RAM, DirectX 12 and a 954MHz core. It’s great for design work, doing some basic animation, or playing some games at a decent quality level.

Sure, you’re not going to be racking up 60fps on the latest Battlefield on Ultra settings, but with enough RAM, an SSD and a decent CPU, you’re going to be well-equipped to bring your setup up a notch, to the next level. It’s a simple, sturdy and well-rounded card that won’t leave you disappointed, adding a little kick into the mix.

RX 550 is the beginning point of the RX series of AMD. The graphics card is centered on the Polaris architecture. It is specially designed for gamers who are tight on budget.

If you want to invest, let’s say $300 in gaming PC that can operate games at 1080p, your dream can still come true. In less than $100, this card is what a gaming build requires. XFX RX 550 is available in two versions, including 2GB and 4GB. The latter is relatively expensive.

Though we do not recommend you go for a 4GB version since you can buy better graphics card at this price such as RX 560. The 2GB version of this card is perfect for users who are looking forward to starting gaming at 1080p.

If you don’t mind mid-range settings, this GPU is the best to opt for. XFX RX 550 doesn’t come with a PCI connector and subsequently draws the power from the motherboard PCI-Ex16 slot. It will make your PC work more efficiently and keep your expenses lower without requiring a heft power supply.

You can operate the card on a cheap power supply conveniently, though we recommend you to go at least with a 400 Watts power supply from a cooler master or EVGA. The card operates on a 128-bit memory interface and is equipped with a core clock above 1100Mhz. Also, it can be overclocked above 1200MHz.

This GIGABYTE graphics card is a low profile graphics card under 100 dollars. It isn’t the most powerful, but it is good enough for casual gamers and people who work with 3D modeling applications.

It only has 2GB of RAM, but it somehow manages to play a lot of games on high settings. It performs best with games that aren’t too graphically advanced, but it can still manage to play new releases on moderate settings without overheating.

To keep it from frying itself, GIGABYTE has included a fan and a heatsink with the GT 1030, and the combination runs silently. So, you can play without hearing any annoying buzzing. It also comes with AORUS to allow you to overclock it with a single click.

The clock is fairly quick for it to be part of such a cheap graphics card, too. It has a base speed of 1468Mhz, and AORUS allows you to overclock it to 1506Mhz. That’s plenty of speed to perform well while rendering today’s hottest titles.

One of the most affordable GPUs from AMD right now is the Radeon R5 235. It’s not great at all, but you shouldn’t really expect anything else at this price point. The value here is impressive, especially if you want a GPU to simply run an OS and some software if your PC doesn’t come with an integrated GPU on the CPU.

It’s a small PCIe card that requires just one expansion slot on the rear of the chassis and runs really cool. The 1GB DDR3 RAM is decent enough for media and general PC use, but won’t work well for gaming at all. This card is best suited for small PC, and NAS builds with a focus on low noise and dimensions.

Not only does it produce little heat and noise, but the 2GB of GDDR6 RAM is ample enough for basic gaming and 3D work. It’ll also fit inside even the smallest of ITX cases that support GPUs, requiring just one PCI expansion slot on the rear of the chassis. Other recommendations on this list will do the same, but won’t be as good for gaming.

ASUS introduces its R5230 graphics card designed with a highly efficient 0dB thermal technology. With the help of this technology, it is capable of dissipating the whole heat silently. It is the best choice for people who want a graphics card to build a home theatre PC.

ASUS – the best graphics card under 100 – is equipped with advanced EMI shielding, which is used to reduce the electromagnetic interface and provide uninterrupted signals for sharp images. This feature is healthier and safe for computing.
This graphics card comes with large heat sinks specifically designed by ASUS that covers most of the surface of the card. Therefore, it provides the proper airflow for cooling, and no sound is producing.