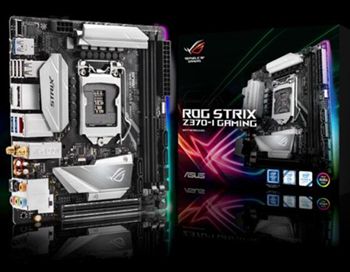 As time passes, the good news is that the best Z370 motherboards have become increasingly affordable, so your chances of getting value for money has never been higher.

If you think your motherboard is out of date, or your computer is getting slower. You can consider replacing the motherboard.

We tested a wide selection of Asus, Asrock, MSI, Gigabyte, SuperMicro and Evga products, and selected the best 5 Z370 motherboards based on budget and form factors.

Whether you want to buy a Z370 motherboard or want to learn more about the motherboard. You can find the answer here.

The motherboards recommended in this guide all received extensive research and evaluation, including enclosure installation (full tower, mid-tower, and ITX where applicable), performance benchmarking, stability testing, and a follow-up period of real-world break-in usage that focuses on gaming, entertainment, and media software.

When possible, all tests are performed with the same components installed to remove any variables except the motherboard itself. We also research the entire field of Z370 motherboards and narrow the list down to the best, most competitive boards before choosing each round of boards for the guide.

Gaming tests are run at 1080p at medium to high settings to remove any bottlenecks caused by graphics card performance. When relevant, both single- and dual-graphics card configurations are tested to ensure motherboard stability in SLI and Crossfire situations. 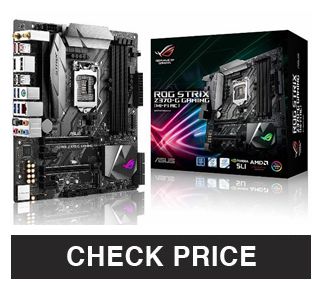 Asus is one of the world’s largest manufacturers of technology hardware, and it has nearly 30 years of history.

All the products they produce with the ROG Strix name are of high quality, as is this Asus Z370 motherboard.

This motherboard has all the features you might need. First, it has three PCIe x16 expansion slots, which are easily compatible with SLI and Crossfire.

In addition, it has two slots for M.2 drives, one of which uses an ultra-fast PCIe lane and the other uses a SATA connection.

On its back, there are also two WiFi and Bluetooth antenna connectors, various USB ports, and more.

Overall, this is one of the best overclocking motherboards for the Z370. It enables balanced and easy overclocking and cooling. 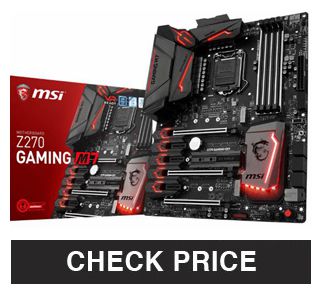 It feeds three x16-length slots from the CPU and automatically switches from x16-x0-x0 to x8-x0-x8 and x8-x4-x4 modes as these slots are inserted.

Moreover, It has impressed us in our games and overclocking tests. Especially for its gaming performance, we even think it is the best Z370 gaming motherboard.

What’s most exciting is that it also gives away Rainbow light strips for free, the included USB 2.0 hub, and even PCIe x8 to dual M.2 adapter cards.

Gigabyte is not as flashy as other top motherboard makers, but the Aorus Z370 Gaming 5’s punching ability exceeds the mid-range weight class.

Gaming 5’s price is one of its advantages. It offers three M.2 slots, Intel Wi-Fi and Ethernet, full RGB processing with multiple connectors, and ALC 1220 audio.

Comprehensive performance is not a typical advantage of the Aorus series, it strikes a balance between function and style, and Gaming 5 excels in this field.

In addition, its processor speed is equally impressive, almost exceeding the 5GHz limit.

However, the shielding and style of the Z370 Gaming 5 will be affected by some larger areas, such as the AMP UP audio section, which may cause problems when installing some larger video cards.

If you are looking for a cheap micro ATX Z370 motherboard, we strongly recommend you to choose ASRock Z370M PRO4.

Although it is not as powerful as other competing products. But considering its cheap price, it is still a good option.

For some, the biggest regret is its lack of Wi-Fi and Bluetooth integration. There are also no RGB LEDs on the board, and there are no connectors for other options.

However, the performance of the board is impressive. It has 2 full-length PCIe slots and can overclock Coffee Lake CPUs very well.

If you’re building a small PC but don’t need the absolute smallest motherboard, mATX is a good choice.

Although mITX is the smallest motherboard size, mATX is favored by many PC manufacturers because it provides many people with a better balance between performance and size.

The DS3H is approximately two inches on each side and provides all four RAM slots of a larger ATX motherboard, which can hold up to 64GB of memory.

In addition, it has a pair of PCIe 1x slots in addition to PCIe 16x slots.

But the board actually does worse than its mITX companion in some ways.

On the one hand, it lacks the built-in WiFi and Bluetooth of the MSI board. In addition, the back I / O on this board is worse in some ways than MSI’s mITX board.

Overall, this is a cheap Z370 motherboard for home use.

Whenever you’re purchasing a new hardware component, whether that be a new monitor or a graphics card, you should always take the major aspects of that product into consideration before concluding your decision.

Otherwise, you may buy hardware that does not match your computer.

We all know that the motherboard is one of the most important hardware of a computer, it determines what CPU / RAM you use, and can also accommodate any upgrades you might think of in the future.

Therefore, you must understand which motherboard is suitable for your computer before purchasing the Z370 motherboard.

What are Z370 Motherboards?

The Z370 motherboard is a printed circuit board that serves as the basis for your computer. Naturally, all major components from the CPU to the microprocessor to the I / O ports are connected or communicate directly with the motherboard.

But what makes Z370 motherboards unique?

The Z370 motherboard includes a unique chipset or design that controls the flow of information between parts connected to the PC.

Benefits of the Z370 Motherboards

How To Choose The Right Mothebroard

Without a doubt, Coffee Lake motherboards are made for modern gaming and execution. It is the Intel codename for the third 14 nm process improvement after Broadwell, Skylake and Kaby Lake.

There are several factors you should keep in mind before buying a motherboard.

First of all, you should understand your needs. Most motherboards on the market are designed according to the specific needs of users. You may need a motherboard that meets your network needs.

The next thing to consider is the size of the motherboard you might need, depending on the case you choose (if it’s already installed).

Also, your CPU should match the socket on the motherboard. You should also keep in mind how many I / O ports the motherboard has, and if so, whether it is a modern port, etc.