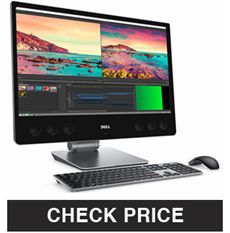 At present, the design forms of a large number of consumer digital products are copied from Apple. The ability to gradually integrate into the brand’s characteristics during the process of copying is the key to the success of the product.

In the all-in-one desktop market, the Apple iMac is known for its stylish, slim and sophisticated industrial design, but there are also some shortcomings, such as not supporting touch screens.

In contrast, Windows makers have more room to play, such as the Dell XPS 27 touch version, ultra-clear touch screen, more flexible base and optional Blu-ray drive, which are advantages over the iMac.

The design of the Dell XPS 27 Touch Edition is based on older models, but the base has been redesigned for better touch operation.

In most cases, the base hinge works well and offers a variety of adjustment angles, even allowing the bottom of the screen to touch the desktop for touch operation.

In addition, the speaker design at the bottom of the screen is still very powerful, with a very loud volume enough to fill a medium-sized room. However, the back of the fuselage is still made of plastic material, making the overall texture significantly less than the iMac.

Although the Thunderbolt interface is not universal, the transmission speed is very fast, which increases the scalability of the machine.

In addition, there is also a slot-loading optical drive designed on the right side of the fuselage, we only evaluate the version of the DVD, users can also choose a higher-end Blu-ray drive.

There is no doubt that the screen of the Dell XPS 27 Touch Edition is very impressive. The resolution of the 2560*1440 is the same as that of the 27-inch iMac, but the advantage is that it supports touch operation.

However, because the current Windows 8 system supports the resolution above full HD is not too good, so some touch icons are very small, the virtual keyboard is not full screen, it is more convenient to use the mouse and physical keyboard.

In terms of display effect, this screen has 100% SRGB and Adobe RGB color gamut, and the black performance is also solid. At the same time, it is one of the brightest computer screens we’ve ever seen, with an average brightness of 372 nits.

However, like other touch screen PCs, this screen has some glare problems, and improving the brightness will bring some improvements. All in all, the screen configuration of the Dell XPS 27 Touch Edition is superb.

Dell XPS 27 touch version of the peripherals are quite good, the mouse and keyboard are wireless design, feel good, easy to pair, can bring a good input experience.

In terms of graphics performance, the machine has a mid-range NVIDIA GT 750M discrete graphics card that can run some mainstream 3D games, but it is more difficult to run large games with full resolution or the highest quality settings.

Summary: A good choice outside of iMac

It can be said that if you don’t care about the operating system, or if you are not a big fan of Apple, the Dell XPS 27 touch version will be a good choice.

It has a clear touch screen, a more flexible base and good performance, the price is lower than the 27-inch iMac, and the stability is much better than the thinned iMac, arguably the best Windows all-in-one.