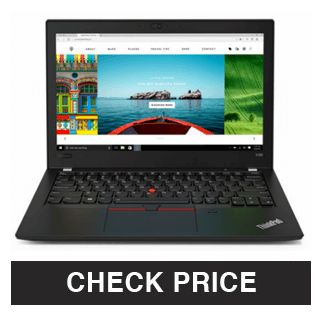 If you need a laptop that can be used for both business and games, then you have to mention the ThinkPad T480.

ThinkPad constantly insists on deep cultivating in the field of office commerce, and has created such a legendary brand. Its unique little red dot is accompanied by generations of professionals.

In most people’s minds, it has already become a help. They are the best companions for the road to life.

The T-series is the high-end product line of the ThinkPad. In the past few decades, its body design and internal structure have remained unchanged. The classic elements of the ThinkPad are perfectly inherited: the appearance is tough, indestructible and stable.

The ThinkPad body has a skin-like coating on the surface, which is delicate and smooth, and the screen uses a 14-inch 1366*768 resolution screen.

ThinkPad T480 inherits the classic small red dot (can replace the touchpad and mouse) and the consistently easy to use 1.8mm long-key keyboard, full of flexibility, can give a good feedback when typing, long typing It won’t be tired either.

The interface has a Type-C interface that supports Thunderbolt 3 and a dedicated docking station interface. The right side of the unit is equipped with two USB 3.0 ports, one HDMI port, one network port and one SD card slot.

It is not difficult to disassemble it. You can see the green and green board with the crowbar gently tilting the back cover. Overall, the internal layout of this machine is very compact, and every inch of the place is fully utilized, there will be no useless gaps.

The T480 has two memory slots. We have a Samsung 8G DDR4 2400MHz high frequency memory.

In order to consider the battery life, the ThinkPad T480 has two built-in batteries. We have 24Wh+24Wh dual-cell batteries on hand, totaling 48Wh. In addition, 72Wh+24Wh configuration can be selected to double the battery life.

For the time being, thanks to the excellent combination of internal hardware, the endurance of the 48Wh version of the ThinkPad T480 is still good. After the actual measurement, it can still have about 30% of electricity in 5-6 hours a day.

Under Storage Storage Test, PCMark 8 will let the computer simulate running ADOBE software such as Photoshop and Premiere, Microsoft Office software, and World of Warcraft and Battlefield 3 games to test the loading speed. The results are more representative of the user’s daily experience. Good or bad.

In the case of closing Optane, PCARK8’s Storage actually ran for nearly three hours, with a score of 2,101. Overall, this mechanical hard drive is not bad, but compared to the solid state drive is much worse.

When Optane was enabled on the ThinkPad T480, almost all projects were running and loading more than twice as fast, so the running test was quickly completed.

From this point of view, Optane’s SSDs do have the performance comparable to SSDs.

From the results of professional CPU performance test software, we can also see that turning Optana on or off does not have much impact on CPU performance.

It is worth mentioning that the ThinkPad T480 Optane’s CBR 15 score is very outstanding. In the past, the multi-core score of the i5-8250U processor we tested was generally 500cb, and the ThinkPad T480 reached an amazing 656cb, thanks to the solid internal use. Material and reasonable heat dissipation design make the hardware have better room for performance.

However, these results may not be representative of everything. The key is to use our commonly used software to experience the improvement brought by Optane.

Booting is a daily task. When the computer is completely turned off, the timer is counted from the time the button is pressed to the system interface, and the test is performed 3 times.

After Optane is enabled, the computer’s boot speed is significantly improved, saving nearly 1 minute of waiting time each time it is turned on.

In the Photoshop CC 2015 software startup speed test session, I started by double-clicking the PS icon. When the PS is opened and the new file can be created, the start time is calculated for the end, and each test is performed three times in two modes.

From the results, the first time the mechanical hard disk starts the program takes 42 seconds, the waiting process is long and boring, and the second and third hot start times are slightly improved, reaching about 10 seconds.

After enabling Optane, the PS program can be controlled for the first time in about 10 seconds, and the second and third hot start times are also shortened, much faster than the original mechanical hard disk.

In the game test, the addition of Optane’s hard drive did significantly shorten the waiting time for game reading, and the game loaded much faster than before.

Someone may have to ask, why don’t I choose to buy an SSD solid state drive directly?

SSD solid state drive speed is really fast, but the cost is also very high, with the game and video files getting bigger and bigger, small-capacity SSD solid-state hard disk is becoming more and more impractical, and a large capacity, only 1T capacity SSDs are usually close to $600, which is not affordable for the average player.

However, the most widely used 1T mechanical hard disk is less than $50, even if it is added to Optane, it will not exceed $200. And through testing, the performance of the Optane+ mechanical hard drive is indeed comparable to some SATA SSD solid state drives.

Overall, Optane is the hardware that accelerates the mechanical hard disk. It does not improve the CPU, memory, and graphics card. However, due to the increase in the speed of the hard disk, it can really bring me a faster boot, program response, etc., help me. Quickly invest in work, games, and reduce boring idle waiting time.

After the addition of Optane, the ThinkPad T480 has a more outstanding price/performance ratio and can help more business people succeed.